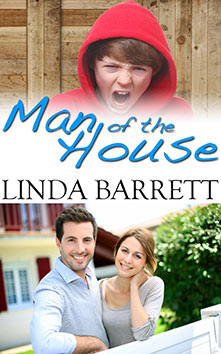 Man of the House

In the short story, Man of the House, widow Nancy Wyatt and divorced dad Steve Duggan are challenged to find their way to happiness. The roadblocks?  A boy who misses his own dad and resents Steve, and a girl who “already has a mother.”

Bobby’s been the “man of the house” for four years now, but constant fighting at school in order to protect his mother’s honor becomes almost more than even he can handle.

Man of the House originally appeared in an anthology of holiday stories.

This can’t be good news. The readout on Nancy Wyatt’s desk phone said Pulitzer Middle School, Hillsboro FL, and her stomach knotted as tightly as a fishing line around bait. Bobby was either sick or in trouble. Please, God, no more incidents. She took a breath and picked up the receiver.

Five minutes later she threw herself behind the wheel of her trusty old Honda, and headed toward trouble. She’d be taking Bobby back to work with her. Fighting required a two day suspension. Fighting! Bobby had always been a good kid. A sweet boy. As an only child, he’d had no one to fight with!

Nancy’s fingers tapped the wheel, her thoughts in turmoil. Did young boys morph into strangers when they hit their teen years? Why hadn’t she seen the change? They’d become so close, she and her son, a team of two who’d clung to each other after losing Jason four years ago. She sighed from deep within her soul, a long, mournful sound. Jason had been a wonderful husband, a terrific dad. She could still picture her two guys having a catch with each other in their back yard. Baseball had become Bobby’s passion by then.

Even at nine years old, he’d shown promise with a good eye and a good arm. And now he was the starting pitcher for his Little League team. Since Jason’s death, Nancy had tried to be strong for her son, cheering and supportive. She’d thought she’d succeeded. But maybe not.

She pulled into the visitors’ parking lot and made her way to the principal’s office. Good God, the principal’s office! As a kid, she’d never been sent there. She supposed she’d been a goody, goody kind of girl. Cooperative, studious—definitely not a trouble maker. And yet, this principal’s office had become too familiar since the spring semester had started. Middle School years were expected to be the roughest, but…Bobby?

Or maybe his issues weren’t about school. His grades hadn’t faltered, so maybe something else was at play. Maybe Steve? Maybe Bobby’s attitude change coincided with Steve Duggan coming into their lives. The thought resonated and hit her with the force of a fast pitch. Later. She’d think about it later.

Nancy spotted her son through the plate glass window of the general office. He slouched on a bench, staring at the door. Not blinking. Just waiting. Waiting for his mom and whatever happened next. His hair needed cutting. The hanks falling onto his forehead, however, couldn’t hide the swelling or reddish-purple hue now blooming around his eye. His hair couldn’t hide the blood oozing from scratches along his cheek. This boy was not the Bobby she knew or thought she knew so well. Where was the son she’d raised?

She rushed into the room. “Bobby! What happened?”

“Nothing? Come on, sweetie. Have you looked in the mirror?”

“Ask him.” Bobby’s chin jutted toward the principal’s private door. “He thinks he knows everything.”

She looked over to see the principal coming toward her, followed by a boy about Bobby’s age. A boy sporting wounds similar to Bobby’s. A boy she recognized, one of the students she tutored at the learning center where she worked evenings to supplement her part-time librarian’s salary.

“They’re both suspended for two days,” said Mr. Emanuel. “Fighting will not be tolerated here, and neither of them had anything to say.”

Phillip sat down at the other end of the bench. The boys knew each other only through school. They might have seen each other at the learning center a few times when she’d had to bring her son, but they weren’t fast friends. They had no history. What could have set them off?

“That’s not true.” Bobby got to his feet and looked at the principal. “I had something to say. I said that he started it.”

The principal motioned Nancy and Bobby inside his office. “And last week, you said Nathan Brownstein started it. The month before, it was….let’s see.” He scanned the computer screen. “It was John Pappas.”

She recognized the names from her prior visits to this office. But now, with Phillip added to the list, she made the connection.

“I tutor all those boys after school,” she said. “So Bobby, what’s this about? You don’t take any courses at the learning center. You barely know these kids.”

Her son jumped to his feet. “I know enough. And I wish you didn’t teach there.”

I bet she doesn’t even know what that means. My mother is very pretty, real-ly pretty, and she doesn’t even know it. But they know it. That’s what guys my age do. They look at girls…and women…and maybe they look harder at a woman without a husband. Well, they’d better stop staring at her. And Steve Duggan had better stop, too. He’s been hanging around Mom for the last few months, and I think she likes him! The whole thing gives me a stomach ache. And I don’t get bad stomach aches anymore, not since after Dad died.

I guess I haven’t been afraid of anything much since I passed my thirteenth birthday last year and stopped being a kid. Personally, I think thirteen is where the line is drawn. On one side, you’re just a boy. Step over it, and you’re a man. As soon as I hit thirteen, I looked at my little family—Mom and me—and realized I was the “man” of the house. The idea felt comfortable. I felt comfortable. It seemed right.

But as soon as Mom introduced me to Steve Duggan, my comfortable world shifted. I thought the earth jumped right off its axis. When I looked into Duggan’s face on that first day, I knew I was looking at trouble. It wasn’t because he was big—heck, some of my coaches are bigger--or because he had these gray eyes that gleamed like the sun shining off metal, or because those eyes stared right at me, maybe even through me. His strong handshake didn’t scare me either. Not then. I could have handled all those things easily, except for one small hitch: my mom.

The person who scared me most on that first day was my own mother. And that’s how I knew Steve Duggan spelled trouble.